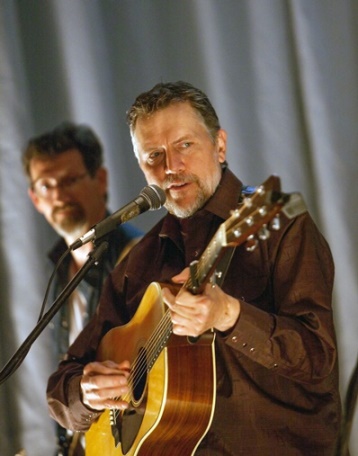 Brad Colerick has been an important factor for the Los Angeles area songwriters and performers. You might be familiar with his music series in South Pasadena, where he presented, performed with, and learned from many other fine songwriters and musicians as his own world view and voice continuted to evolve. His songwriting is personal, his guitar provides a solid accompaniment and he has a very fine voice. Terry Boland wrote the following for No Depression:

“When singer-songwriter, Brad Colerick moved to Los Angeles from Nebraska he carried with him the heart of the country in a town that wasn’t known for its affection for country music. But it the songs came as natural to him as the flow of a wild midwestern river. He began in his youth with a pure love for the music, writing his own unique folk-country songs that reflected his surrounding landscape in stories and melodies to match his inner visions. He has always written big sky songs that mined deeply into the heart. This is the clearest signature of his critically acclaimed 2014 release, Tucson. His songs are heart sketches, traces of longing, of love lost and found, redeamened in the art of song.”

Brad will will be joined by two other musicians, Guillermo Guzman on bass and Tim Fleming on Pedal steel guitar. Hear Brad sing his song, This is what I do. Don’t miss his debut with the Pasadena Folk Music Society! The show will be in Beckman Institute Auditorium (Little Beckman) and tickets are $15 for adults and $5 for Caltech students and children. Tickets can be purchased on the phone (626-395-4652) with a credit card (a service charge will be added per order) or purchased at the Caltech Public Events Ticket Office at the Winnett Student Center for face value (Generally open Monday-Friday 9AM-4PM).