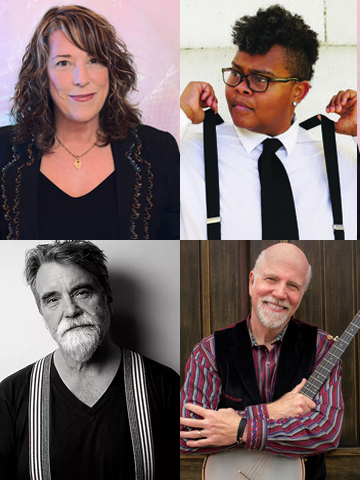 Our next two Pasadena Folk Music Society concerts are coming fast: four soul-stirring songwriters this Sunday, April 3, and five sock-knocking instrumentalists on Sunday, April 10. Ticket-holders will have access to the live performances at 4 p.m. and on-demand replay for 48 hours.

John McCutcheon, such a long-time stalwart of folk music that his website truly is www.folkmusic.com, organized these concerts. They are part of an online series for which he has teamed with our Folk Music Society and other organizations. McCutcheon will perform the last show in the series solo on May 7, but for the for the two shows in April he has recruited some of his favorite musicians to join him.

For “Songwriters in Round” on April 3, the lineup is McCutcheon, Darrell Scott, Beth Nielsen Chapman and Crys Matthews (clockwise from lower right in the photos above).

For “Instrumentalists in the Round” on April 10, McCutcheon’s virtuoso co-stars will be Muriel Anderson with her harp guitar, Howard Levy with his harmonica, and the duo Alasdair Fraser & Natalie Haas with fiddle and cello.

The hundreds of songs John McCutcheon has written over the past 50 years range from whimsy such as Riding My Bike to righteous urgency, such as Vote, Dammit!. He recently wrote and recorded a whole album of pandemic-inspired songs, Cabin Fever. Pete Seeger said, “John McCutcheon is not only one of the best musicians in the USA, but also a great songwriter, singer and song leader.”

Darrell Scott‘s best-known songs include some recorded by other singers, such as You’ll Never Leave Harlan Alive, covered by Brad Paisley, Patty Loveless, Dave Alvin and more. His Hank Williams’ Ghost was named Song of the Year by the Americana Music Association. NPR’s Terry Gross interviewed Scott and his father for Fresh Air, archived here.

Songs by Beth Nielsen Chapman also have been recorded by diverse artists who know a great song when they hear one, such as Willie Nelson and Mary Chapin Carpenter. Stirring examples of her performing her own songs include Sand and Water and Happy Girl. Her Nashville Songwriters Hall of Fame page is here. An interview on a Florida PBS station is here.

Crys Matthews‘ songs inspire. Two from her latest album are Call Them In and Selfless. Holly Near says, “Crys Matthews opens up a collection of fiery sermons, truth-telling journalism and rally cries…sung to us with her compassionate voice full of heartbreak, indignation, encounter, uprising and revolution.” An interview of her from the National Endowment for the Arts is here.

McCutcheon, Scott, Chapman and Matthews will discuss songwriting between performances of selected songs during the April 3 show.

McCutcheon is a master of both hammered dulcimer and Appalachian dulcimer, as well as banjo, fiddle and other instruments. He and four of his favorite musicians will share songs, conversation and fun during the April 10 show.

Muriel Anderson is one of the world’s most accomplished players of the harp guitar and also dazzling on classical guitar in various styles. She won the National Fingerpicking Guitar Championship in 1989, the first woman ever to do so. She uses the harp guitar’s multi-octave range when playing Mark Knopfler‘s Why Worry or Turlough O’Carolan‘s Si Bheag Si Mohr. She makes a six-string guitar sound like a whole band on Stevie Wonder‘s Superstition or her Polka on a Banjo medley. A guitar legend, Les Paul, called her “one hell of a great player …what I like is the touch that Muriel has on the guitar, the way she plays it like we all wish to play.” Another, Chet Atkins, said,”Muriel Anderson is a good friend and a great guitarist. She deserves national recognition.”

Howard Levy is best known as an innovative jazz harmonica player. “As Art Tatum was to the piano, so is Levy to the harmonica: a hyper-virtuoso whose feats can be admired and studied but never really replicated,” according to a Chicago Tribune review. He is also an accomplished keyboardist. Hear him on harmonica and piano simultaneously on My One and Only Love, by Guy Wood and Robert Mellin. Levy was a founding member of Bela Fleck and the Flecktones in 1988 and recorded four albums with them. Here’s a clip of him playing with that band. He has accompanied musicians as diverse as Dolly Parton, Paul Simon, Chuck Mangione and the Czech National Symphony. Hear him with the Evanston Symphony Orchestra playing his Concerto for Diatonic Harmonica and Orchestra.

We can certainly vouch for Alasdair Fraser and Natalie Haas. They have played our series a couple of times, and we were actually trying to arrange an in-person show with them this year but were blocked by COVID restrictions. Alasdair, from Clackmannan, Scotland, is passionate about fiddle and is known for his expressive playing, mastery of the instrument, and dedication to fiddling, as seen by his Valley of the Moon fiddle camp in Santa Rosa, Sierra Fiddle Camp in the Sierra Nevada foothills, and Skye Week in Scotland. He has performed with many musicians over the years, including his own band Skyedance. Since 2003, he has played frequently with Natalie Haas. She is a very fine cellist who started playing music as a child, attending one of Alasdair’s fiddle camps in California before training further at both the Juilliard School and Berklee College of Music. She loves Celtic music and has played with Natalie MacMaster, Mark O’Connor, and many others. She and Alasdair are amazing together in what they sometimes call the “wee fiddle and the big fiddle show.” See what we mean by listening to Alien Ceilidh and High Reel Set.

Here are the ticketing-page links for the April 3, April 10 and May 7 online concerts. The regular price per ticket is $20 plus a $4 handling fee. You can find other pricing options in the drop-down menu next to “Livestream Ticket,” including discounts for students or unemployed people and premiums for a family/household ticket or music supporter ticket. All tickets enable replay of the concert during the 48 hours after showtime.

McCutcheon’s concert on Saturday, May 7, will be “The Story Behind the Song,” starting at 5 p.m. He will talk about the inspirations behind, research for and references in songs that he’ll perform during the show. Ticket holders are invited to submit requests and questions in advance.

A portion of the ticket revenue from this series comes to the our Folk Music Society and will help us resume live, in-person concerts when lingering concerns about the pandemic and other issues have been resolved.