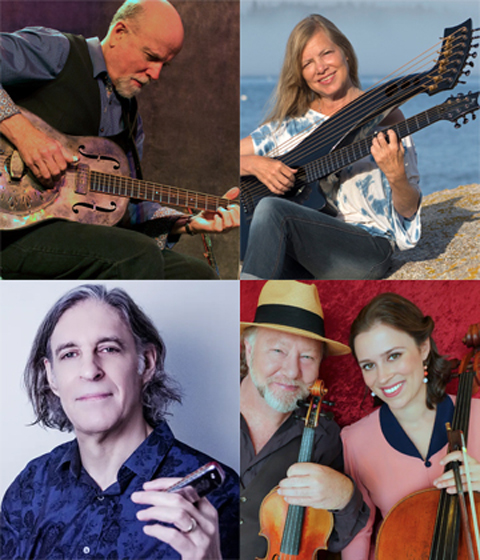 You have a couple days left to get tickets — at this link — for our next online concert, this Sunday, April 10. It’s an unusual opportunity to hear songs played by masters of fiddle & cello, harmonica, harp guitar and hammered dulcimer, all in one show.

A ticket gives you the option of seeing and hearing live, with a simultaneous chat box, beginning at 4 p.m. PDT on April 10 or recorded, any time for two days afterwards. Or both, if you want to marvel again at just how he or she played something amazing.

The concert is part of series organized by John McCutcheon, a folk-music performer and songwriter for five decades. He partnered with our Pasadena Folk Music Society to make the shows available for fans of folk music in Southern California. McCutcheon will perform alone for the last concert the series, on May 7, but the April 10 event, “Instrumentalists in the Round,” will showcase five musicians: McCutcheon, Muriel Anderson, Howard Levy, and the duo Alasdair Fraser and Nathalie Haas (clockwise from upper left in the photos above).

The “Songwriters in the Round” concert on April 3 was stirring, particularly when McCutcheon sang a new song he has co-written with Tom Paxton honoring fighters who are resisting the invasion of Ukraine by Putin’s Russia: Ukrainian Now.

Near the close of that concert, McCutcheon offered these comments about the April 10 lineup of instrumentalists:

— “Alasdair Fraser is arguably the greatest living Scottish fiddler and he has partnered with Natalie Haas, who is a cellist who will change your mind about what’s possible with a cello.”

— “Howard Levy was an original member of Bela Fleck and the Flecktones. …I don’t think you’d get much argument from harmonica players that he’s probably the greatest harmonica player in the world. He does stuff that doesn’t seem humanly possible. He’s a fabulous piano player as well.”

— “Muriel Anderson is an astonishing fingerstyle guitarist and she has promised to bring her harp guitar, and she might even figure out how to do a duet with Howard, which ought to be breathtaking.”

— “And I have a brand-new hammered dulcimer that’s arriving via UPS tomorrow, with an extended range and all kinds of bells and whistles, that I will be debuting for you all next week.”

There’s more information about each of these outstanding musicians, including links to videos of them playing their instruments, in the “April 10: Instrumentalists” section of news update we sent last week (online at this link). For other samples of their music, here are some additional links:  Fraser and Haas playing a medley of reels; Levy playing Autumn Leaves; Anderson picking Here Comes the Sun; and McCutcheon hammering Step by Step.

Tickets for the April 10 concert are available here for $20 plus a $4 handling fee. You can find other pricing options in the drop-down menu next to “Livestream Ticket,” including discounts for students or unemployed people and premiums for a family/household ticket or music supporter ticket. All tickets enable replay of the concert during the 48 hours after showtime. Why pay when other music is free online?  1: The music is worth it. 2: Musicians need to eat. 3: As McCutcheon’s comment about his new dulcimer illustrates, what you pay musicians helps support musical instrument makers, too. 4: A portion of the ticket revenue from this series comes to our Folk Music Society and will help us resume live, in-person concerts when lingering concerns about the pandemic and other issues have been resolved.

The fourth and final concert in this online series with McCutcheon, on Saturday, May 7, will focus on him telling stories about songs he has written. If you get a ticket in advance (here), you may submit requests and questions to him.

Although the Folk Music Society must wait a bit longer to resume our in-person concerts, events are starting to return, and there are some wonderful options this spring. Pandemic-related restrictions vary. If you have concerns, you may want to check.

Caltech will present the Caltech Orchestra in a free outdoor concert this Sunday, April 10, at the Red Door Café patio, near Holliston Avenue and San Pasqual Street on the campus. The same program will be presented at 1:30 p.m. and again at 3:00 p.m. Featured will be the Chamber Winds, Brass Choir and String Orchestra performing works by Grieg, Dukas, Caplet and more. Other Caltech programs, both music and science, can be found here under “Upcoming Events.”

McCabe’s, in Santa Monica, also requires vaccinations for its upcoming shows, which include tomorrow, April 9, another duo of string-instrument virtuosos: Rob Ickes and Trey Hensley.

Friday, April 22 is Earth Day, and it is becoming common to hear April described as “Earth Month.”  You can honor our planet and learn about its perilous state in various celebrations. Find 20 Southern California events at beaches, in the flatlands, and throughout the area on the weekend, April 22-24, here.  The Pasadena Earth Day event will be in Memorial Park, 85 E. Holly Street, Friday, April 22, 5 to 8 p.m.  There’s a little more information here.  The Metro L Line (formerly known as the Gold Line) goes right there at the Memorial Park Station. The closer to home you go, bike, carpool, or use public transportation, the more you keep with the spirit of protecting our planet.

A couple of online events related to Earth Day are a Zoom webinar, The Path to 100% Renewable Energy: Opportunities and Obstacles, from the Pasadena League of Women Voters on Thursday, April 21, 7:00 to 8:30 p.m., and a program at Caltech, Addressing Energy Storage Challenges: Making Electrolytes That Can Help Batteries Store More Energy, at 10 a.m. on Friday, April 22. Prior registration is necessary for both of these events. We need to be thinking about the future. There’s a lot to be done.

The Renaissance Pleasure Faire returns for 2022, on weekends from April 9 through May 22, 10 a.m. to 7 p.m. at the Santa Fe Dam Recreation area, near the 605 and 210 freeways in Irwindale. There are 13 stages on 20 acres. The event will mark the faire’s 60-year anniversary. This unique festival features music, dance, theater, costumes, arts & crafts, magic, games, revelry, fantasy, food, and plenty of fun for the whole family. Get an idea of the wide range of events by looking at the calendar for opening day, this Saturday, April 9. Be careful around the burrowing owls nesting near the parking area. Event promoters hope to have as many people arrive by 9:45 a.m. as possible, to keep from disturbing them.

The Los Angeles Times Festival of Books will be at the University of Southern California on Saturday and Sunday, April 22 & 23. It is a great cornucopia of books, authors, live music, talks, panel discussions and more. Food is available. Admission is free, as are most of the programs, though you can obtain reservations at a modest fee to make sure you get a seat for a few of the high-profile authors. Take the Metro E Line (formerly the Expo Line) train and get off at Jefferson or Exposition Park stations, or you can drive, and park for $14 parking on campus. Here’s a map, and the schedule (it scrolls and scrolls.)  Plan ahead; there’s a lot to consider. While you are there, you can stroll the USC campus, take in the impressive Exposition Park Rose Garden, Natural History Museum, the California African American Museum and more, all close by.

The folk music festivals are coming!  The Topanga Banjo Fiddle Contest and Folk Festival is Sunday, May 15, 9 a.m. to 5 p.m. at Paramount Ranch in Agoura Hills. This outstanding family festival started in 1961. It brings together top-notch musicians, including Po’ Ramblin’ Boys from Tennessee’s Great Smoky Mountains and Honey Whiskey Trio (who have played our series a couple of times) as well as young musicians on the road to mastering fiddles, guitars and other instruments, along with some very talented non-professional adults, who also jam together and compete on the stage for prizes. It’s a fun, child-friendly environment with folk-dancing, food, vendors and exhibitors, and three stages with excellent sound, all to be experienced in the great outdoors. Bring your instrument, a hat and a folding chair, and you can jam or compete, or listen and wander through it all. Mark your calendar! Tickets are available now or at the gate. The Pasadena Folk Music Society hopes to have a booth there, so stop by and say “Hello!” Our web site is pasadenafolkmusicsociety.org.

The Spring Strawberry Music Festival is coming up, May 25 to 30 in Grass Valley at the Nevada County Fairgrounds. There will be no fall festival, and we just learned that the Claremont Folk Music Festival will not be held this year, though they hope to be back next year. We’ll let you know about more festivals soon.

The Theodore Payne Foundation Native Plant Garden Tour returns this year with their self-guided tour of 49 gardens throughout the Los Angeles area on April 22 & 23, sites open 10 a.m. to 5 p.m. View a wide range of stunning native California plant gardens and talk to owners and knowledgeable volunteers about how they created them. Tickets need to be purchased ahead of time, at various sites.

The South Pasadena Garden Tour and Plant Swap is on Saturday, April 23, 2 to 5 p.m., with two gardens this year. And the Creative Arts Garden Tour, based in Sierra Madre, is on Sunday, April 24, 10:30 a.m. to 4:30 p.m. There are four gardens on a self-guided tour, and it is easiest to buy tickets in advance.