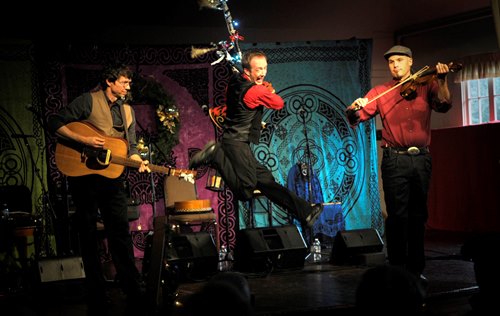 Molly’s Revenge has played for us a number of times and this “California Celtic” band has picked up a good many local fans in Southern California and throughout the West Coast. Their energy and musical excellence is quite memorable, and they haven’t played in Pasadena since 2011, so it is way past time that we brought them back. This is a very special Winterdance Celtic Christmas Celebration with guest vocalist, Amelia Hogan and dancers to bolster this fine trio for what promises to be an exciting and wonderful show. The performance will include Christmas songs both old and new, all played with a Celtic twist. They have been doing variations of this show for the past 13 years, but have never made it down to our series to perform it. We have been trying to make this show happen for some time and now we are set. With the dancers, we’ve had to move the show to Ramo Auditorium to have enough space.

Molly’s Revenge is comprised of a trio of Californians who have dedicated their lives to Celtic music. David Brewer has been playing whistle, bodhran, and four types of bagpipes for over 20 years. He studied in Scotland at the Ceolas Music School in South Uist under the tutelage of some of the best pipers in the world. His authentic and unique style of playing has earned him the reputation of being one of the most accomplished pipers on the West Coast. John Weed is a classically-trained violinist who switched to playing Irish fiddle about 20 years ago. John lived in Ireland in 2000 and taught fiddle workshops at the Flowing Tide International Music School in Doonbeg, County Clare. He attended the Frankie Kennedy Winter School in Dunlewey, County Donegal where he has studied with Ciaran O’Maonaigh and Dermot Mcloughlin. In recent years his fiddling has grown to include American, Quebecois, and Swedish fiddle styles. Guitarist Stuart Mason has been collecting and performing traditional music for over 40 years. He has appeared on stage from Ireland to China performing Celtic, old-time, bluegrass, and his own compositions, which have won awards from the West Coast Songwriters Association. He also leads workshops and classes in traditional music techniques at music festivals and camps. As always for this special Christmas show, they will have a wonderful female singer joining them. We will let you know as soon as her name is announced. John Doyle, founding member of the great Irish/American band, Solas said, “They bring to the music a vital and joyous creativity that excites even the hardest of hearts.” Don’t miss this very special show!

Tickets are $25 for adults and $5 for children and Caltech students. They are available at the Caltech Ticket Office by calling (626) 395-4652 and at the Caltech Ticket Office at 1200 E. California Boulevard in Pasadena (Southeast corner of Wilson Avenue). Their usual hours are 10:00 a.m. to 4:30 p.m., Monday through Friday. Tickets are sold for face value if you come to the Ticket Office. There are fees for phone orders by credit/debit card and for online tickets as well, which you can buy here until midnight, Dec. 18. Fees are higher online, especially multiple tickets, because there is a charge on each individual ticket. You can also buy tickets at the door on the night of the show with no fees at all. We begin admitting people into the auditorium at about 7:15 PM.

The show will be in Ramo Auditorium, which is located at the southern end of Baxter, the eastern building of the two identical buildings on either side of the “Beckman Mall”, the grassy area south of the round, white Beckman Auditorium. If you know where Beckman Institute is, we’ll have signs leading you to Ramo, and if you don’t, check out this map, find building 77 and Ramo is at the bottom end. The round map on this page might help you visualize the building better. In this larger hall, a sold out show is unlikely.

Beckman Institute Auditorium at 400 South Wilson Avenue. On concert night, free parking is available in the lot behind Beckman Auditorium (the large round, white building at the end of Michigan Avenue), but this lot may fill up, especially if there are other events on campus that night. You can always find parking for our shows in the two parking structures on Wilson Avenue, just south of Del Mar Boulevard. On weekends and after 6:00 PM, you may park in spaces that have individual names. Restrictive wording at the structures refers to weekdays before 6:00 PM. There is also parking available on Wilson Avenue itself. Beckman Institute is on the other side of the large lawn (currently a staging area for nearby construction) on Wilson Avenue, on the first floor of the left portion of the building. If you get to the fountain and pools that point toward the white, round, Beckman Auditorium, you have gone too far. See this map. Beckman Institute is building #74 and the parking structures are #123 and #124.

Parking is essentially the same for Ramo as other shows, you’ll just walk to a different building. There will be the usual limited parking right behind the large Beckman Auditorium- It is OK to park in slots with names on weekends and evenings, but the lot may fill up, depending on what other events may be taking place on the Caltech campus.  This is the best place to park for the handicapped (try to come a little early- email us at [email protected] if you need help planning your visit). The parking lots between Michigan and Wilson have been closed- a new building is rapidly rising at the southeast corner of Wilson and Del Mar.  The most reliable parking will be on Wilson Avenue, either on the street or in the two parking structures just south of Del Mar Avenue, across the street from Beckman Institute.   One structure is just north of the Institute at 341 S. Wilson Avenue, and the other, 405 S. Wilson, is just a bit south of the Institute.   Rest assured that after 5PM on weekdays, and all day on weekends, you can park for free in these structures, despite signs that allude to the more restricted parking rules during the day on weekdays.   You are permitted to park in slots that have names on them here as well.  From the structures, walk around the big lawn (much of which is currently fenced in for the building projet to the north), past Beckman Institute, on either side of the fountain pools, heading toward the white, round Beckman Auditorium, then turn right and go the the far end of the building on the left side of the big lawn.  On this map, we are suggesting that you can park in structures #123 and #124 in the upper left. Ramo Auditorium is at the far end of building #77.  If you need help figuring this out, try calling (626) 616-4559